Pedestrians can enter the Darling Harbour precinct via footbridges from Market, Druitt/Sussex, Bathurst and Liverpool Streets in the city and Union Street in Pyrmont. But there are some lesser-known means of access and points of interest.

Darling Harbour has some ‘flyover’ roads:

It is possible for keen pedestrians to gain access to some of them, either for extra ways to get in or out of Darling Harbour or to gain some interesting, elevated views. Residents and workers are the main users of these routes but casual visitors to Darling Harbour may also find them interesting.

Near the northern end of the Entertainment Centre Car Park there is a pedestrian ramp and some stairs. The stairs lead to a footpath on the southern side of Pier St. while the ramp leads to a footpath on the northern side. These two footpaths run only back towards Harris St. (Pier St. becomes William Henry St. on the way). It isn’t possible to walk along Pier St back towards the CBD. 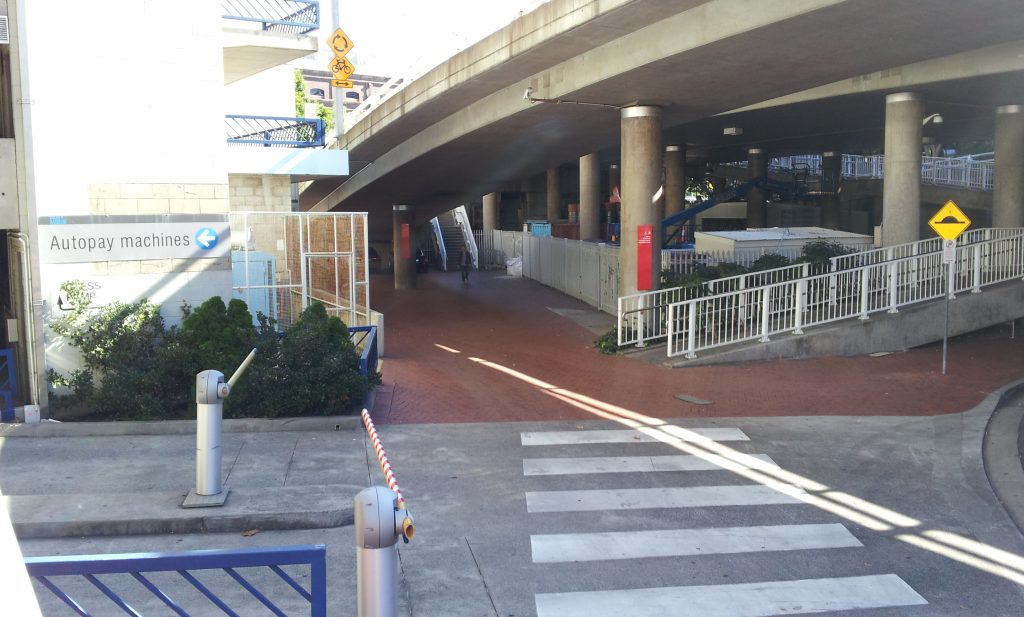 Car Park exit on the left. The stairs in the distance with the white handrail lead up to the southern side of Pier St. while the pedestrian ramp goes to the right then up to the northern side. Ignore that elevated roadway descending next to the stairs – that is the exit ramp leading to Darling Drive.

The footpaths on either side of Pier St. provide an interesting view along Darling Drive and the Light Rail. On the southern footpath you’ll get a close-up view of the old walls of the Powerhouse Museum while on the northern side there is an old building: ‘Sydney Sewerage AD 1900.’ (Also known as Sewage Pumping Station No. 1, SP001). You can also look down on the end of Pyrmont Street.

If you turn right at Harris St. you’ll be at the Ian Thorpe Aquatic Centre. Next to the entrance to the Aquatic Centre there are some stairs which lead down to Pyrmont St. If you turn left at Harris St. you walk past the Powerhouse. Turn left before you reach Hannah’s Pies onto a footbridge to take you to the Monorail stop at Darling Harbour. The footbridge then turns left again to take you back to the Car Park exit where you started.

The Lift from the Exhibition Centre to the Western Distributor

At the northern end of the Sydney Exhibition Centre, on the eastern side just up the ramp from the long water feature, is a glass lift that goes up to the Western Distributor. At this point the Western Distributor has about six different elevated roadways. The lift travels to a footpath on a lower deck which takes westbound traffic to Harris St.

The footpath only runs toward Pyrmont, not to the CBD. After walking past the Exhibition Centre roof you can look down onto Darling Drive, the Monorail and the Light Rail. There are some stairs down to Pyrmont St. and ‘Exhibition’ the Light Rail station. At this point there is a ramp that goes up and  eventually crosses over Harris St while the original footpath ends on the eastern side of Harris St.

The Footpath along the Northern edge of the Western Distributor

One of my favourite elevated footpaths runs from the end of the Druit St. footbridge in the south-eastern corner of Cockle Bay all the way to Murray St. behind the Novotel Hotel west of Cockle Bay. On the way you get some great views over Cockle Bay and its surrounds.

In the south-eastern corner of Cockle Bay there are some stairs leading to an interesting structure which includes a viewing platform. It then leads up to the footbridge from Druitt/Sussex St and to another set of stairs which take you up to the Western Distributor footbridge. On a sunny day the view over Cockle Bay can be spectacular and as you walk west you can enjoy panoramic views of the CBD on the right to the Convention & Exhibition Centre on the left. Further west have a look at the Goldsbrough building which is now serviced apartments but used to be a very large wool store. The footpath ends behind the Novotel Hotel with stairs descending to the corner of Murray and Pyrmont Streets. Of course the pub on the corner is called the ‘Wool Brokers Arms’.

On Friday we drove to Woronora Dam and stopped for fish and chips on the way. Woronora Dam supplies water to the southern suburbs of Sydney especially Sutherland Shire. A 48″ pipe connects it to the Penshurst Reservior which is close to our place. Construction on it began in 1927 and it was completed in 1941.

The Sydney Catchment Authourity has some information about its history. The National Library of Australia has some great pictures taken during construction.

We’d planned on buying fish & chips at Waterfall and taking them to the dam for a picnic, but we were so hungry when we got to the shop we decided to eat there. Legendary Fish & Chips is a popular place to stop when heading north on the Princes Highway. If heading south it is trickier: take the left lane at Waterfall train station onto the overhead bridge. Turn right and park in Kooraban St. There is a footpath leading down from the western side of the bridge to the shop. To re-enter the highway there is a lane back over the bridge on the eastern side .

I’ve added some pics to our album.

In November 2006 Barbara and I visited Melbourne and we stayed at the Rendezvous Hotel in Flinders Street. Last week I spent two days and two nights at the Rendezvous and had time to wander around, admire the architecture and wonder about its history. I found some interesting details in the Victorian Heritage Database and the Walking Melbourne website.

The second source ends: “The building ceased functioning as the Commercial Travellers Association club in 1976 and fell into disrepair before being restored as a hotel in the late 1990s.”

“Disrepair” is an understatement. The National Library of Australia’s ‘Picture Australia’ database links to some amazing pictures of this hotel. Some photographs were taken by RMIT students in 1992 and show it to be completely derelict.

The new owners have done an amazing job to return large parts of it to something like original condition.